Currency - All prices are in AUD

Currency - All prices are in AUD

The History of the Rainbow Bridge

Posted by Positive Impressions on October 24, 2019 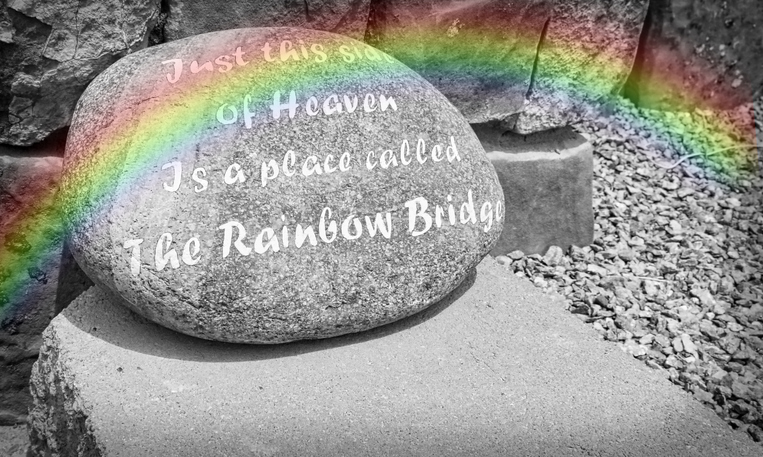 “Just this side of heaven is a place called Rainbow Bridge.”

We know we’ll see our pets pass on some day, but even if we’re only together a few years, it hits hard.
When it comes to literature about grieving for our pets, nothing is as popular as the poem “The Rainbow Bridge.” Its message gives us hope that our pets are happy and we’ll see them again after this life. Where did this poem come from, and who wrote it?

In 1890, Walter Moore adopted an abused dog, saving it from death. This inspired his daughter, Margaret Marshall, to write a story from the dog’s point of view called “Beautiful Joe.” It won a writing competition held by the Humane Society to find stories of "Kind and Cruel Treatment of Domestic Animals and Birds in the Northern States." With this success, she was able to publish the story as a novel in 1894 under the pen name “Marshall Saunders.” The book did more than just help popularize animal welfare: it became the first Canadian novel to sell over one million copies. Over the next 30 years, it was translated into dozens of languages, selling over 7 million copies worldwide.

After the death of one of her dogs, Saunders followed the novel with a sequel, “Beautiful Joe’s Paradise; or, The Island of Brotherly Love.” In it, a dying dog enters an animal heaven presided over by Beautiful Joe. Like its predecessor, the book has strong animal welfare themes. While there’s no rainbow bridge linking the paradise to our world, everything else from “The Rainbow Bridge” is in place. After death, animals live in their own utopia, free of disease and able to play to their hearts' content. However, it’s not perfect as they still miss their owners. When an owner dies, he or she is reunited with their pets, and they enter heaven together.

While the paradise in the poem borrows from Saunder’s novels, the rainbow has its roots in Norse mythology. Midgard, the world of humans, and Asgard, the world of the Norse gods, are connected by the Bifröst bridge. This “shimmering bridge” between our world and the afterlife is depicted as a rainbow.


Who Wrote the Poem?

In the early 1990s, several versions of “The Rainbow Bridge” started appearing in publications. Who wrote the original? The most often quoted version is credited to Anonymous, but it’s just one of several poems published with similar themes in the 1990s and 2000s. There are four possible sources for the “original” Rainbow Bridge:

- Paul C. Dahm claims he wrote a poem about the Rainbow Bridge in 1977. However, he didn’t copyright the poem until 1994, and it wasn’t published until 1998.
- An anonymous poem was published in the Mid-Atlantic Great Dane Rescue League’s newsletter in 1993.
- William N. Britton published and copyrighted “Legend of Rainbow Bridge” in 1994. He tried and failed to claim he was the sole rights holder to the Rainbow Bridge.
- Wallace Sife’s “All Pets Go to Heaven” doesn’t have the bridge, but is otherwise very similar to these poems. It is part of his book “The Loss of a Pet,” first published in 1993.

Whoever you think may have written the poem, one thing remains the same: This poem helps us look ahead after a pet’s death and deal with the grief.


Show Your Clients You Care


Positive Impressions, LLC helps veterinary clinics and hospitals connect with clients through the life of their pets, from birth to death. We have sympathy cards with a range of messages including this famous poem, as well as memorial products that help your clients remember their lost pet and celebrate the time they shared together. If you’re looking for new ways to build a relationship with your clients, check out our current specials on our website, or visit us on Facebook.